Once there was a polar bear as white as white could be,
He roamed around his frozen land, to see what he could see.
But everywhere he wandered, however far he trekked,
Held no surprises, nothing new, no colour, not a speck!
The land was white, the sky was white, the animals as well,
All through the day and through the night, the snow constantly fell.
The polar bear had had enough of seeing snow all day,
He pondered, wondered, fantasized, of how to get away.
Then one day from on a cliff, whilst looking out to sea,
The idea came, he realized, just how he could be free!
No time to waste so he made up his mind right then and there,
He took a run up to the edge and leapt into mid-air.
He timed his dive quite perfectly, it was really very nice,
He landed safely with a crunch on a floating lump of ice.
His friends all hollered from the shore as he floated away,
"Polar bear, oh please take care, and come back safe,OK?"
He sailed for days across the sea, but no land came in sight,
Everything around him was, unfortunately still white.
"Shall I turn around?" he thought, "And give up on this dream?"
But at that moment he saw something he had never seen.
His eyes were wide, his heart stood still in awe of such a view,
The snow had stopped and up above, the sky had turned bright blue!
Each and every single cloud had parted one by one,
Now sapphire sea surrounded him and sparkled in the sun.

He looked around in wonderment as tears rolled down his face,
He thanks the waves for bringing him to that beautiful place.
All his hopes and all his dreams were coming true at last,
But sunshine and the warm winds meant, the ice was melting fast!
His luck was in, for up ahead, a shore of golden sand,
Awaited him, yes, he had found, a new and different land!
For the first time in his life he felt, warm sand under his feet,
It came as such a welcome change from ice and snow and sleet. 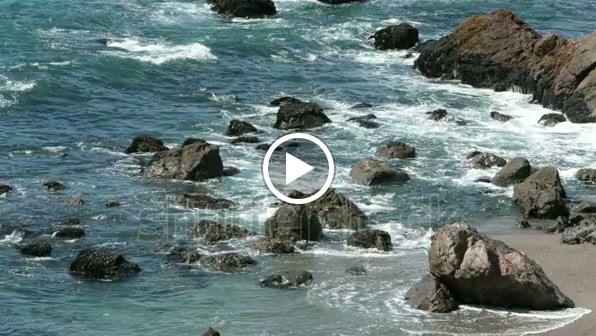 He saw some pink shells striped with red and some that shone like glass,
And pretty pebbles in the surf, of copper, jade and brass.
He left the beach and made his way, along a little track,
Where butterflies showed off their wings, of cobalt blue and black. 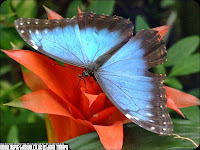 He stepped into a forest which was bursting full of green,
And birds with splendid feathers of fluorescent tangerine.
Lime green frogs with bright blue spots, red snakes with stripey tails,
Multi-colored tortoises and giant purple snails. 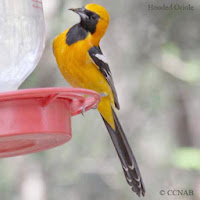 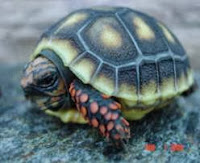 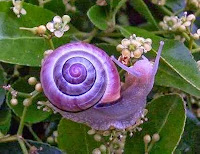 Through the trees the polar bear, continued on his way,
When suddenly he saw a view which took his breath away!
A plain of wildflowers for, as far as he could see,
And in his heart he knew he'd found, the place he longed to be. 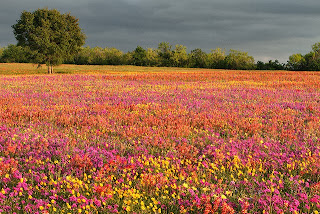 A billion tiny petals waved in every shade and hue,
Of pink and yellow, orange, red, of purple, green and blue
The polar bear just stood and stared in silent wonderment,
Until at last the day had past, and he felt quite content.

And when the stars filled up the sky, he turned around to go,
Back to the place that he called home, that land of ice and snow.
He made his way back through the woods and back along the track,
The colours of the day had gone, instead now only black. 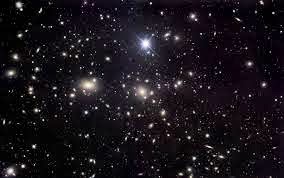 But every now and then the moon would shine it's silver light,
Between the clouds that past it and, illuminate the night.
And standing on the beach he wondered what could be his boat,
He needed something big and strong enough to stay afloat. 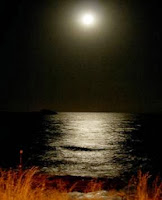 In the moonlight he saw something floating near some rocks,
When he got close he saw it was, a great big cooler box.
He jumped on board and cast it off, into the ebbing tide,
The polar bear sailed smoothly with, the current on his side.

The polar bear had been at sea for two days and a night,
When all the blue just upped and left the world shrouded in wide.
He closed his eyes and dreamed about the colours he had seen,
He couldn't wait to tell his friends, about where he had been.
He woke up with great surprise, the box had run ashore,
He rubbed his eyes and realized that he was home once more.
He gave a roar then all his friends, appeared and gathered round,
They danced and sang and clapped and cheered, to see him safe and sound.

Once there was a polar bear as white as white could be,
He roamed around his frozen land to see what he could see,
For having taken such a trip, he'd made himself a name,
From that day on, the polar bear, never was the same. 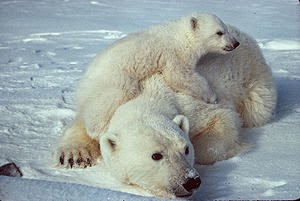 I just had to add a stanza Lee

And soon his trip was forgotten,
since his mate had left her den
Now he has a daughter, friends...
And he'll never be lonely again!
~~~ 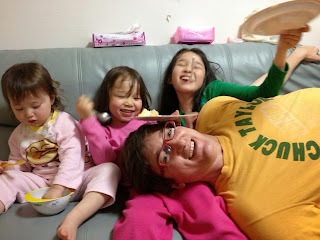 Lee and His Daughters Laughing at My Additions!
He'll be back soon after I read and review one of his children's books!