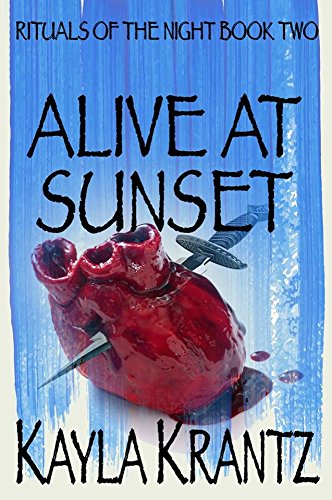 I've been having parts of a song come to mind the last few days as I was reading Alive at Sunset. "One way or another, I'm gonna getcha..." No wonder, I realized since the serial killer in Krantz's two books must have that as its theme song! The other songs, by the way, were inspiration to the author as she wrote...

Krantz continues to provide a compelling, suspenseful story as she moves into the second book of what will be a trilogy. Readers discover as this book begins that Chance has been in a coma for three years.  In the meantime, Luna has left home and gone on to college where she's living with a new friend Amanda... During the entire three years, Luna visited the hospital to verify that Chance is still in his coma...and she is safe!

But, now, Chance has awoken...

And there is where issues began... First, we soon discover that Chance has been employed as a nurse, without any credentials whatsoever. Ok. this did not make sense, added only a disruption to the story, and the beginning of disbelief on my part. Krantz seems to not be able to separate the basic setting for the story and build it, free of the fantasy or paranormal happenings in the book. Chance could have been hired as a nurse aide or other service worker in a hospital and still could have performed the damage he accomplished there!

And then, Chance sees the opportunity to get to Luna through her roommate, setting up Amanda as a dumb blond character that, while believing Luna that Chance could have been a killer...but now, he's been in a coma and is oh, so nice...Duh!
So she allows Chance to move in with her and Luna! And then, there are major discussions between Chance and Luna, while Amanda is in the apartment, without NO disruption??? Just NOT believable, especially since Amanda was jealous of Chance.

In the earlier book, Luna had got into major problems with her father who chose to take Chance's opinion over Luna's... We had no other character development for her father or mother for that matter. In the second book, the parents are back in the book, again, with no background on either to make them more real to readers. Yet a major event occurs, and Luna is traumatized...with no explanation whatsoever about making up with him after what happened in the last book.

Frankly I am amazed, chagrined, and totally puzzled how his young author has developed such a creative skill to present her stories, yet fails so badly with basic character development, setting, and ensuring that the story is believable...  Their is no continuity for minor, but important characters. They seem merely tools that are used to support the main characters and readers recognize that we are missing much about the overall scope of the book as we would normally expect...and receive...

In the second book, Chance is a "normal" serial killer that merely went about the business of taking revenge on those that cost him three years of his life. It became even more of a slasher story since the murders were senseless, quick, and did only one thing, hurt Luna...

At the same time, Krantz adds a human touch to Chance, which does soften, only slightly, his bloody thirst, when he discovers one of this heinous actions has resulted in more than expected...

As I've said, the basic story line is suspenseful, but only in the true slasher situation, where you're totally involved in who is going to get killed next. I did not feel the intrigue coming through in this second book as was experienced with the paranormal DreamWorld aspect. And the totally unbelievable concept that Chance moved in with Luna and had free access to her is pure mind-boggling nonsense. Sure, she had been traumatized and was facing a similar situation... but having the roommate date and have sex with a killer while the girl about whom he has an insane obsession is in the other bedroom... well, it boggles the imagination.

I am being specific about the critical issues in this book, because it is obvious to me that the author has much talent. It is my recommendation that she reads more genres (and different types of music!) other than what she obviously wants to write in. She needs to learn about the basic outline of a novel that surrounds the specific genre activity. So far, she's not making it happen and readers soon lose interest in the blood, guts and gore... Sad to say...

GABixlerReviews
Posted by Glenda A Bixler Reviews at 1:36:00 PM