The day they buried Ruggerio “the Blind Pig” Bruccola, I wore a black hoodie to the funeral. White letters splashed across the front read “Your Message in This Space.”

Six hours later, I was sprawled in a fake-leather chair in somebody’s idea of a classy bar on the top floor of the Biltmore. Outside the streaked plate-glass windows, the city skulked in a drizzle.

Vinnie Giordano strolled in, looked the place over, and dropped heavily into the chair across from mine. He was wearing the Providence wise-guy uniform: Tapered LouisBoston suit, black shirt, white silk tie, white leather belt. He flashed me his hard look, something he probably practiced in the mirror daily. It still needed work.

“Wear that to the funeral?” he asked.

“Lucky nobody shot you.”

“I saw you there this morning, whispering in the mayor’s ear,” I said. “Didn’t know the two of you were tight.”

“We ain’t. He grew up on Federal Hill, same as me and Bruccola and your asshole buddy Whoosh, but since he got elected he’s been acting like he don’t know us. I was surprised to see him there, so I was just thanking him for paying his respects.”

The day had dawned clear and unseasonably warm. A low March sun vaporized the snow banks, conjuring a dense gray fog that drifted over the shoes of the mourners. The women’s Sergio Rossi and Prada pumps, the men’s Ferragamo wingtips, and my Reeboks.

To the west, the spire of Pastor’s Rest Monument, the tallest in Swan Point Cemetery, floated over the fog, marking the final resting place of the city’s leading nineteenth- century ministers. To the east, the gray surface of the Seekonk River crinkled like old skin. A yellow tug churned upstream with the tide.

At least one thousand mourners, a Who’s Who of Rhode Island crime, politics, business, and religion, had gathered in a grassy clearing still patched with snow. All about them, an undergrowth of laurel, rhododendron, and azalea shivered in the southerly breeze. Alongside the gunmetal-steel casket with its gold-plated handles was a bonfire of funeral wreaths. Figuring an average of three hundred dollars each, it must have set the assembled back a cool hundred and fifty grand

All the Providence city councilmen were in attendance. Enough state legislators for a quorum. Three state Supreme Court justices. And Ilario Ventola, bishop of Providence. Funny. I hadn’t noticed any of them at the twins’ funeral.

Brady Coyle, my teammate on the 1990 Providence College basketball team that finished 11 and 19, stood just behind the mayor and Giordano. At six foot six, he towered over them, bending to murmur something in Giordano’s ear, the mobster another client of Coyle’s thriving criminal-law practice. Whoosh was there, too, one arm draped over the widow’s quaking shoulders. Near as I could tell, he was wearing pants.

Sixty yards away, a pair of state troopers steadied telephoto lenses on the roof of their black Crown Victoria. The two FBI agents and a photographer from the paper were bolder, moving in close behind the rhododendrons to snap their pictures.

I watched as Bruccola’s body was lowered into the same ground that held H. P. Lovecraft, Thomas Wilson Dorr, Theodore Francis Green, and Major Sullivan Ballou. I was surprised they didn’t get up and move to a better neighborhood.

But for Rhode Island’s grieving criminal class, Swan Point Cemetery had been the place to be and be seen this morning. It was the social event of the season.

“We gave the old man a hell of a send-off,” Giordano said.

“You did. And I won fifty bucks in the running newsroom pool on next prominent Rhode Islander to get his ticket to Hell punched.”

“In that case, the drinks are on you.”

He flagged down a waitress and ordered Maker’s Mark straight up. I ordered another club soda, and he made a face.

Giordano’s eyes got big as he tried to imagine life in Rhode Island without the solace of whiskey. He called the waitress back and asked her to make his a double.

“So what happens now?” I said.

“Succession. Arena’s the obvious choice, but he’s going down on that federal labor- racketeering rap. Last time there was a power vacuum in Providence, wiseguys were found stuffed in car trunks at the airport and floaters clogged the river for a year before Bruccola took over.”

“Man, you’re talking thirty years ago. Shit like that don’t happen no more. Goombahs like Arena and Grasso and Zerilli are too old for that mess. Younger guys like me and Johnny Dio and ‘Cadillac Frank,’ we got business degrees from PC and Boston College. I’m a real -estate developer, Johnny’s in construction, Frankie sells cars. We don’t shoot people no more.”

“How about garroting them with piano wire or caving their heads in with lead pipes?”

“So those are the contenders, you, Dio, and Cadillac Frank?”

A kid with a bag of newspapers shuffled in and made the rounds of the tables. Giordano tossed him some coins, glanced at the headline--POLS PAY RESPECTS TO DEAD MOB BOSS--and slapped the paper down on table.

“Jesus Christ, Mulligan. This ain’t no way to make a living. How about you and me find a nice piece of land, put up some condos?”

“I promised my mother I wouldn’t sell out till I’m forty,” I said, “so let’s talk about this again in October.”

“Still not tired of life at the bottom of the heap?”

“The money sucks, but you meet a better class of people.”

“Like government clerks? I hear you been at the secretary of state’s office checking out the owners of the buildings that burned down in Mount Hope.”

“How’d you hear about that?”

“A clerk I know. Also hear you’ve been snooping around the neighborhood at night.”

“How’d you hear about that?”

He took a pull from his drink, slipped a Partagas from his jacket pocket, and snipped the end with a silver cigar cutter. The ban on smoking in public accommodations was still hung up in committee, cheating him out of an opportunity to flout it. I leaned over and gave him a light with the Colibri.

He drew on the cigar and blew a cloud of fragrant blue smoke in the general direction of a frowning matron. “Tell you what, Mulligan. You did me a good turn last year, keeping my nephew’s drunk- driving bust out of the paper. He’s doing great, by the way, majoring in business at URI, running the campus sports book for Whoosh, clearing two grand a week. So you done a good thing there. Let me do you a favor now. Stop wasting your time in Mount Hope, and I’ll toss you something better.”

“There’s one of them big journalism prizes in it for you, Mulligan, a nice plaque you can hang on the wall of that dump on America Street. Think it over, and call me if you’re interested.”

Before I could ask how he knew where I lived or what the hell he was talking about, the mob lightweight hauled himself to his feet and lumbered toward the elevators. I almost felt sorry for him. It must be hard having Godfather dreams that never come true.

On the TV above the bar, Tim Wakefield chucked knuckleballs at a diluted spring- training lineup. In my mind, I could still see him trudging off the mound after giving up a walk-off home run to Aaron Fucking Boone in the 2003 ALCS. Of all the ways the Red Sox had found to lose to the Yankees over the years, that one was the most heartbreaking. Two World Series championships in the last five years had not erased the memory. All over New England, fans still grieved the loss like a death in the family.

I sipped my club soda and looked out the window. It was getting dark. The Independent Man, Rhode Island’s state symbol, gleamed in his spot of golden light atop the statehouse dome. I chuckled, remembering the time they hauled the grand old statue down and lent it to the Warwick Mall to lure Christmas shoppers.

Beside the dome, the state flag, featuring an anchor and the motto Hope, drooped in the rain. If we were true to ourselves, we’d haul that sucker down and run up the Jolly Roger. 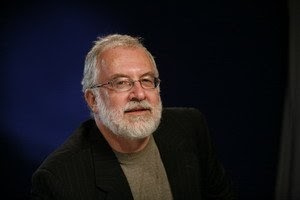 Bruce DeSilva will be on the Reviewers Roundup Discussion Board from 4 to 6 PM, TOMORROW, Monday, October 4th and you are invited to join that discussion!