Rare Opportunity - Read Along With Me - Not Fair by Steven Manchester! 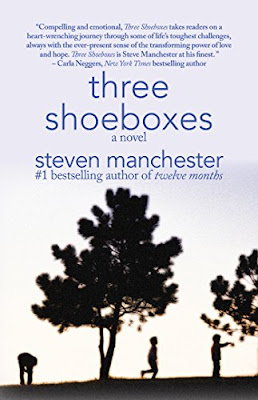 OK BRH Readers... With the opportunity presented by Author Steven Manchester, we are sharing an entire short story with you! Even I haven't read it! So, read along with me, and tomorrow, I'll share my thoughts and you can compare what you think along with my own response... Interested?

Sooo, I hope, when I write my review tomorrow, you take a few minutes to comment and share your own thoughts on this prequel... This should be Fun! Thanks to Steven Manchester! Check out his background message too!

~ a letter from the author
In 2014, I wrote a stage play entitled, Three Shoeboxes. I wanted to create a story where the main character (Mac) held life in the palm of his hand—a beautiful wife, three loving children, a comfortable home and successful career. And then I wanted to yank Mac to his knees, creating a situation where he would need to summon every ounce of his strength, faith, and courage to get back on his feet. I chose an invisible enemy, Post Traumatic Stress Disorder (P.T.S.D.), a struggle that has proven very real for me. But instead of using a military experience as the trigger, I went with an auto accident—hedging my bets that this would be more relatable to the audience. Once I had those story components in place, it was easy to remove Mac’s basic sense of security. Suddenly, he realizes how fragile his mind is, how each thought and feeling can produce physical symptoms that are torturous. In trying to spare his family from this monster, Mac tries to conceal his inner chaos—but to no avail. Left to contend with the ignorance of stigma, an insensitive justice system and the struggles of an invisible disease, his family is eventually taken from him. But in Three Shoeboxes, this father’s undying love may be just enough to make things right again. In 2015, this play went from the page to the stage (with Footlights Repertory Company in Swansea, MA) for a four-night, sold-out run. My daughter, Isabella, played the role of the middle child (Bella), and it was an absolute thrill to combine my passion for writing with her love of theatre. It was also a thrill to sit back and watch the actors take my two-dimensional characters and breathe life into them. The audiences wept. We received standing ovations. I will never forget the experience. It was a true gift. Fast forward another year and I decided that I loved Three Shoeboxes so much that I was going to convert it into a full-length novel. This feat, however, is easier said than done, taking a story that is complete at 20,000 words and adding another 50,000 that isn’t total fluff. It took me nearly six months to produce the first draft and, fortunately, my publisher (Lou Aronica) is as patient as he is brilliant. With his keen eye and generous direction, I was able to stick the landing and produce the full-length novel. As a primer for Three Shoeboxes, I penned the short story “Not Fair”—where I’ve thrown readers right smack into the middle of the characters’ lives and strained relationships. Although the entire short story takes place at the deep end of the pool, I promise that all will be addressed in Three Shoeboxes. Family means everything to me and with Three Shoeboxes I wanted to write a true-to-life story that captured the depths of a father’s love—even when all else fails. I hope you enjoy the novel. From my end, I can tell you that Mac and the Anderson clan will remain with me for many years to come. “How can someone take something from you when it lives in your heart?” — Dr. Faust Fiore Sincerely, Steve Manchester

Email ThisBlogThis!Share to TwitterShare to FacebookShare to Pinterest
Labels: Not Fair, prequel, Read along with me, Steven Manchester, Three Shoeboxes