Because I could not stop for Death—

He kindly stopped for me—

The Carriage held but just Ourselves— 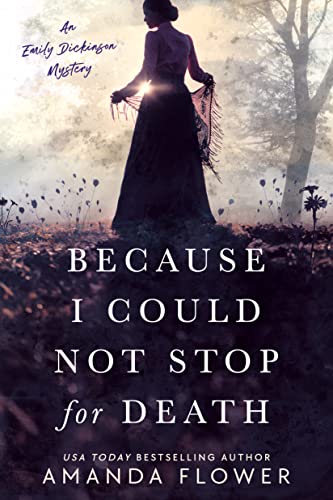 ...Did you enjoy this morning’s services? My father did a fine job, did he not?” Miss Dickinson looked at him down her petite nose, which was quite an accomplishment seeing how she was a foot shorter than the twins. “I did not go to church. I am not a member of this church as you well know. Carlo and I were just out for a morning walk. That’s our means of worship.” The twins looked at each other. “Surely, that is just an oversight,” Urschel said. “You have not taken the time to finish your membership. Our father would be happy to welcome another member of the Dickinson family into his flock.”
“You are assuming that I intend to. My god is not there.” She pointed at the white meetinghouse with its peaked steeple. The twins were confused. “If he is not there, where is he?” “If you must ask, you will not understand the answer. Therefore, there is no purpose in answering a question that does not need to be asked.” She looked to me. “Willa, Carlo and I have finished our walk. We will accompany you home. Since you ran into me on the way home, it will explain the delay to Miss O’Brien.” I nodded and started to follow Miss Dickinson.

Let me close by sharing directly from Amanda Flower about her dream... This literary masterpiece has been created as a result of the fascination of the author for this Writer... What a Tribute! I loved it and You Will Too!

To write this book is an actual dream come true. I have been a fan of Emily Dickinson since I was fifteen and was assigned the poem “I heard a Fly buzz - when I died” to memorize in high school. Ever since I have been fascinated with the poet and her work, and considering the content of the poem, it’s not surprising I was destined to write mysteries. Emily has inspired me as a writer, but as a mystery novelist, not a poet. The unanswered mysteries of Emily’s work and life are what I find more interesting. The first novel I wrote inspired by Emily was a contemporary cozy mystery, Crime and Poetry, where the sleuth interprets Emily’s poems to solve the crime. Because I Could Not Stop for Death is the first time I have written Emily as a character, which has been exciting and challenging. So first and foremost, I want to thank Emily Dickinson for her life and work, without which this novel would not exist. I would also like to thank the countless Dickinson scholars who helped me with this work by making their analysis and research available in books and articles. I read so many accounts of Dickinson’s life for this one novel. It would be impossible to share them all. However, most noticeably I would like to thank the following: Richard B. Sewall, the author of The Life of Emily Dickinson, and Aífe Murray, the author of Maid as Muse: How Servants Changed Emily Dickinson’s Life and Language.
GABixlerReviews
Posted by Glenda A Bixler Reviews at 4:14:00 PM