This piece deals with the first ode ever written on our American Revolution. I hope your readers find it interesting and significant to our lives....


From Tyranny to Liberty 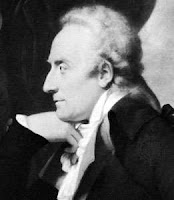 These having been some of his experiences, he finally defines tyranny as being any government in which those persons who are  given the responsibility to execute the laws, these same men become tyrants when they make, destroy, break, interpret, obstruct, or even only dilute the laws with impunity.

The lessons Alfieri wanted to impart are clear--political regimes must be based on the ideals of liberty. They must exalt and invigorate moral life. Should despotism arise, the people must deal with it with the same means as the despot. If they want to remain free, they must exercise their basic rights of praising public opinion, which preserves freedom of speech and guards against would-be tyrants. Governments must not be based on fear, nor should they be established with the help of the nobility, the military, or of the clergy. Should an individual happen to be born in a tyranny, or for some reason subjected to it, he must take the route of exile if he cannot fight from within, or to die, if necessary, if liberty is to be preserved.

Far from being an anarchist, Alfieri recognizes many forms of governments. He prefers the republican types because in them the people, through representation, are guaranteed their individual and collective rights to liberty.
Individuals of sensibility go through life accompanied by the perennial struggles between the instinctive needs of the body and the arresting or restrictive forms of society. When individuals balance the two forces, they achieve liberty. When they are overwhelmed by either or by both, they have the choice of committing suicide, in the manner of Cato of Utica, as exemplified by Dante in his Divine Comedy.
Natural death represents, for the romantic writer of the late eighteenth and early nineteenth century, the ultimate and highest form of liberation. Suicide becomes necessary when the individual is powerless against the internal and external forces that act upon him. Alfieri deals with this situation in his famous tragedy, Saul. Through the biblical King of Israel, Alfieri represents the two levels of tyranny that exist in man.
Rebelling against God for having chosen David as the next King, Saul cannot acquiesce to his inner desires to continue as King. His counselors falsely and secretly urge him to stay on, thus rekindling the old man's passion for power. As a result, he becomes a victim of his passions by subjecting the people to them, and disregarding the supreme laws of the word of God. When the Philistines are about to capture him, Saul suddenly realizes what he had done and what had taken place. He draws the sword and plunges it into his heart, thus robbing the enemy of that precious booty--life itself which is worth living only when free from tyranny. Through this heroic last act, Saul is able to achieve purification and his eventual liberation.
Madame de Staël, the self-appointed innovator of what she termed as stagnant Italian literature, was one of the first among the many critics to reject Alfieri and his works. By answering her criticism, Giacomo Leopardi, a poet of the first part of the nineteenth century, also gives his own appraisal: Madame de Staël says that Alfieri was not born to write, but to do, if the customs of his time permitted. But Alfieri distinguished himself from almost all of the so-called erudite and pedantic critics of his and our time. Exactly for this reason, he was the authentic writer he was.
Throughout his lifetime, Vittorio Alfieri had wanted to die. He attempted suicide several times, the first at the age of seven. He may already have understood that man everywhere is born with chains and generally remains in them until death. Though mankind is aware of those chains, few individuals acquire the wisdom and the willingness to cast them off. On realizing the divisional struggles that followed America’s Declaration of Independence, Alfieri was not happier than he had been after he wrote about the Bastille. The Machiavellian intonation becomes significant in the concluding tercet of his Ode to America's Independence:

What am I to sing about? And, to whom?
I look around and weep:
Force alone rules the world! 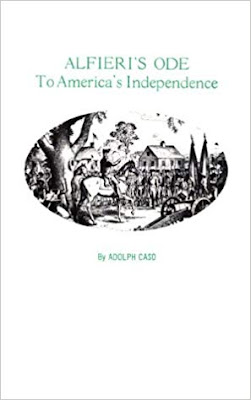 Observations on the ODE

The Italian title of Alfieri's ode is L’America Libera, which could be translated as America the Free—meaning, free from the tyranny that the English imposed on the American colonists, and free from foreign intervention that might restrict the complete attainment of freedom.
The composition is divided into five odes, each having eight stanzas of sixteen lines, except for the third which has six stanzas. These stanzas, or strophes, are composed of a given number of eleven foot lines (endecasillabo), interspersed with seven foot lines (settenario). Their rhyme scheme is the following: A b C B a, etc.
The present English translation does not follow Alfieri's scheme or his highly rhetorical style.
Alfieri wrote the first four odes in 1781. Upon completing them, he seemed happy with the result; he was happier with the outcome of America's war of Independence.
After having had some spiritual troubles--turbamento di spirito--he wrote in 1783 the fifth and final ode, and this may help explain his observation that betrayal and tyranny go hand in hand and more often than not unwittingly stand on the side of tyranny and against liberty.
It is interesting to note that one of his first-titles was The War of America—La Guerra D'America. The present essay is taken, with few exceptions, from Scritti Politici e Morali, V. II, edited by P. Cazzani, Asti, 1966. The only critical analysis available is that of F. Maggini, Rime (of Alfieri) published in 1933.

Unbeknownst to many, Italians played a great role in forging America's destiny during those revolutionary years. Aside from a large amount of correspondence between American and Italian men of letters, there were also many who visited each other's country.
Jefferson and Franklin visited Italy; Philip Mazzei, Charles Bellini, and others came to America. Besides corresponding with Giacomo B. Beccari and Gian Francesco Cigna, Benjamin Franklin corresponded on a regular basis, from 1750 to beyond 1771, with Giambattista Beccaria. Franklin and Jefferson also corresponded regularly with John Fabbroni.
Jefferson was influenced by the famous architect, Andrea Palladio; but few know of the influence that the Italian humanist Leon Battista Alberti had on Jefferson. Alberti's two books are of enormous importance; they are: De re aedificatoria and Trattato della famiglia. The first deals with architecture; the second with the way to build a successful family. Another Alberti, this one a musician, actually gave Jefferson instruction in music in Virginia.
Another Beccaria—Cesare Bonesana—was of more influence on John Adams and on Jefferson than is otherwise accepted. Beccaria's book. On Crimes and Punishments, was being published in the American colonies as early as 1773. Joseph Francis Vigo was a wealthy fur trader when he made himself and his wealth available to Colonel Clark for the conquest of the Northwest Territory.
Fathers Chino and Salvaterra had established thirty or more .missions and churches in California from 1681 until 1711. William Paca, whose family came from the province of  Naples, signed the Declaration of Independence, along side Caeser Rodney, another American of Italian origin. George Wythe, also a signer of the famous document, was married to Elizabeth Tagliaferro.
The Declaration of Causes of 1775, passed by the Continental Congress on July 6 of that year, was written in English and in Italian only. During this time, Philip Mazzei was writing articles and pamphlets for the Virginia Gazette on behalf of America's independence.
Of course the land of America was described in the epic poems of Ariosto and of Tasso, and by other authors of the Rinascimento.
It should be of no surprise that another Italian wrote the first history of America's War for Independence. Charles Botta, History of the War Of Independence (Kennikat Press, 1970), is considered the first such history written on the war. It received accolades from many great Americans, including Jefferson, who made the following statement: "...when the superiority of the work over every other on the same subject shall be known, I think it will be the common manual of our Revolutionary History."
The American Congress of the 1770 decade commissioned several warships. Three of them carried the names of Christopher Columbus, Andrea Doria, and John Cabot. Two others were significantly named the Protector and the Tyrannicide.


Adolph Caso, author, publisher, photographer,  is an ongoing contributor to Book Readers Heaven. He has written much on his home country, Italy, and its contributions to the world. This piece is one of those; however, I found much of interest and relevance to each of us and today's world... Taking liberty from Adolfo's submission, to highlight/spotlight what I found to be most important for today...

Thank you, Adolfo, for once again sharing from your research and study...