Murder in Germantown! Street Lit at Its Finest - By Raheim Brooks

If you are not familiar with Street/Urban Fiction, and don't want to learn, in
my opinion you should return a book and not give a review... I found Brooks' book one of the best I've read in the genre and is well worth your consideration! If you want to begin learning about Ebonics, I recommend The Magic Pencil by Karen E. Dabney. In my opinion, it is a must-read for every child living in America...and I also recommended it on Amazon to those who gave this book a low rating... Of course, this is just my personal opinion...as well as one who wants to provide a professional review of what she reads... You decide... Note that one of the sentences pointed out on Amazon was one that I simply loved... To me, it flows with rhythm, specific relevant adjectives, and a play on police issues of today... dare I say with a little sarcasm to match... Anyway...

He was never without the Burberry trench, sneer, ethics stamped on his yellowish forehead, or adroit police impracticalities glued to his aura. He had deep eyes that were slanted. Not Asian slanted, but African American slanted. In the Germantown neighborhood where he had grown up, he had been given the street moniker, China.
!!! 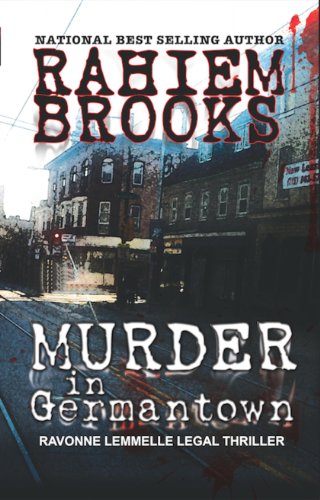 
The author, in an interview, suggested that readers would either love or hate his new main character, Ravonne Lemmelle. What I felt was admiration for the character himself. For the author, I thought he created a strong character that told things like they were, believing in nobody but the law and his own desire to win--within the limits of the law. I wouldn't say I love him, but I believe he would make a perfect series character. Lemmelle is introduced in Murder in Germantown. The fact that he chose defense law was an interesting choice, I think...but then, the author writes in first person and also shares Ravonne's inner thoughts. I found this amusing and it added a depth to the character that you don't always learn about... Here's one comment I loved: I had been accused of being a twenty-dollar word showoff. I read every night and I asked Mr. Webster to define any foreign wordage. My adjective and adverb coffer was corpulent. See what I mean.

At the same time, Brooks does indeed create a number of significant, memorable characters that creates a flavor unique to the genre as well as the story itself. His movement from one specific character to another is easily discovered since each has been drawn with a personality that sometimes shocks, but then delights as readers begin to sink into the novel...

Although Leslie Jones started out as a comedienne, I could see her playing the role of Jewel, a kidnapper who takes wives of men for ransom...

"The name is Jewel."

"Okay, Jewel. Why am I here?" he asked getting down to business. She stood and threw him a sardonic grin.  "Here's the deal," she said and then added, "your wife Samantha has been kidnapped."
"No! No! No!" He barked.  It was more of a scream than a masculine yell. Mark began to rise from the floor and Jewel flashed a chrome Colt .45.
Mark thought long and hard about getting up off the floor. Hopefully, Sue was recording all of that. The thug had activated the hand set when the ear piece had lost signal. "It's 10:30 in the morning, Mark Artis. I shall have 200,000 unmarked, non-sequential, American dollars in my possession by the close of the banking business day. That's traditionally three p.m. And I adore tradition, Mark."
"I do not have that kind of cash," he warned her earnestly.
"Then you no longer have a f...ing wife!"
~~~ 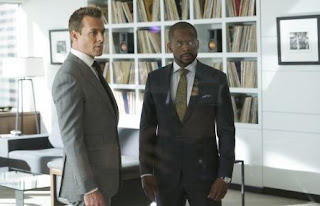 I saw Dule Hill on Suits last night and thought he makes a cool-looking lawyer, but it was in his performance on Psych and his dry humor that made me think he'd play a perfect Ravonne...

I then sat back down at the defense table and put on my smart pince-nez. They made me look fussy and intellectual.
A man passionate about my craft of criminal defense.
I was!
I whispered to Mark to behave when the verdict was read. Reporters rushed in to fill the available seats. The judge hit the bench with the jury in tow. They looked forlorn. Shameful. My mind immediately began to ponder errors and plot appeal strategies.
I doubted if I would represent Mark in the appeals process because I was aware that he would conjure a reason I, Ravonne Lemmelle, was ineffective. Yes, that was the number one appeals ground, and Mark would desperately want to get back to the streets if he was found guilty, so he would try to make me the fall guy. It was highly doubtful that would work out for him...
~~~

The thing was, however, that Ravonne had unexpectedly gotten Mark Artis off...And that was not the plan... Now everything changed... Mr. 357 now appeared... One of my favorite character actors, Sam Jackson, seem to fit this villain...

Mr. 357 was his moniker. Mr. 357 was one gargantuan tandem of mystery, suspense, thriller, and a dose of comedy. He believed the FBI caper was comical. A parody. The joke was on...
...Who cared?
He was by no definition invincible. He did strive for intelligent crimes, though, which helped him thwart arrest. His crimes were plotted with droplets of sex, brilliant gun play, and Hollywood pandemonium. A web site—www.mister357.com— was devoted to theorists, propaganda weavers, and conspiracy mongers regarding his identity. He was as famous as Deep Throat. He was fortunate. He was also a slick bastard who mailed bodies to the local FBI, Interpol, and Scotland Yard at his discretion.
~~~

Mr. 357's plan had been spoiled... He had gotten off and it was payback time... And Ravonne was picked to play a part in this important plot! This time he would become Skylar Juday. He looked forward to Act 1...

Ravonne's Ex, Ariel, came to stay...she needed a husband now... But Ravonne wasn't even willing to talk unless she spent time with their son... Of course, that would also present problems since he was quite happily involved in a gay relationship with Dajuan Jones, a popular singer... And he realized there would always be a place in his heart for Ariel--heartbreak!

I was not going to allow her to eat me alive, so I popped in TP3 (12-Play Part 3 by R. Kelly for all of the R&B remedial) and commenced a lonely drive to nowhere.

I had Beyonce's Irreplaceable booming as Dajuan walked in. I pretended not to see him and continued to sing the break up track. Dajuan's smooth and creamy peanut butter complexion glowed. His curly, close-cropped hair was disheveled and his bushy eyebrows rivaled Einstein's. He sat with his exposed six-pack on the love seat and hid his deep brown eyes in the palm of his hands.


It may be obvious by now that this book was character-driven for me and I enjoyed them all. I also enjoyed Brooks' writing style moving from character in character for street language, at the same time Ravonne and others went through the legalese for a legal case.  I hadn't yet mentioned the murder... The first shot was intended for somebody else, but a young boy was shot, Quincy James, by accident! It was the third recent shooting and with Quincy being a well-known popular student, there was bound to be trouble... The police needed to get on this immediately...

The book is complex, especially with Mr. 357 in his various roles, so readers will need to be alert. I had no problem since I was hooked by the first chapter and moving strong into the story when the ending was coming... Even with some things actually taking place within the story as readers are reading, still you will not have a clue as to what is coming...and...the action is just beginning. Got to say, I loved the book and hope to see Ravonne again soon! Highly recommended! 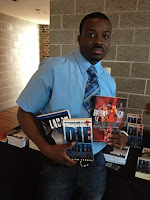 An accomplished literary executive with 8+ years leadership experience and a flair for social media marketing and public relations.
Additionally, I have worked on the following freelance projects by other authors.
Buffalo City Czar by James Scott (Editing/Typesetting)
Dedicated to Bmore City by Nigel Ali (Editing/Typesetting)
Hoeism by English Ruler (Proofreading/Typesetting)
High Rollers by Envy Red (Proofreading/Typesetting)
'Til It Happens To You by Kristofer Clarke (Proofreading)
My debut novel, LAUGH NOW earned 2010 AAMBC BOOK OF THE YEAR, and I was honored with 2011 AAMBC AUTHOR OF THE YEAR. LAUGH NOW won Most Creative Plot at the Creative Excellence Awards.
Specialties: developmental editing, reviewing, critiquing novels, and publishing coaching.