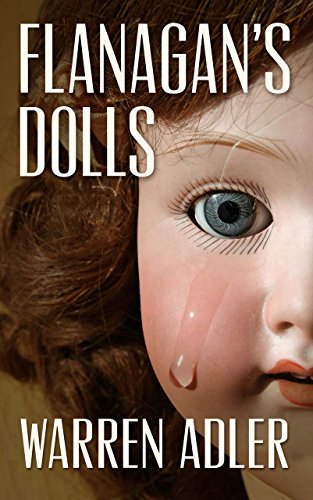 At that point the front bell tinkled and the Flanagans exchanged puzzled glances. An eight o’clock customer was as unusual as snow in July. Emily patted her hair, but Flanagan was swifter, having slapped away Caesar’s heavy head and padded through the long hall. At that hour, he knew, serious business was afoot. It was not the time for browsers, not in October.
At first, he saw no one, until he heard the squeak of the main room floor. An older man turned abruptly, offering a startled, slightly annoyed look through thick spectacles. In one hand, the man held a brown slouch felt hat. In the other was a doll with a china head. Flanagan, responding to habit, dated the man as circa 1930s, with a polka-dot bow tie that could not hide a wattled neck, striped shirt, blue serge double-breasted suit with wide lapels, a gold signet ring on his pinky.
Frozen in time-period, Flanagan concluded, probably retired for twenty or thirty years. He had well-shaved shiny red jowls which shivered as he spoke. “I’m looking for a certain doll,” the man said, gazing down at the object in his hand. “Not this.” He was holding one with a long-sleeved taffeta dress with buttoned bodice and white laced-trimmed petticoat. She was wearing a hairdo with a wraparound braid. “That’s a shiny finish, porcelain,”
Flanagan said, mostly to establish his authority on the subject of dolls, which was hardly awesome. “Doesn’t matter. She doesn’t want it. I’m not a collector,” the man said grumpily. “But I know what I’m looking for.”
“A man with a mission. Good starting point,” Flanagan said. The man leveled magnified steel blue eyes on Flanagan, whose attempt at ingratiation fell flat, prompting the strictly business approach. 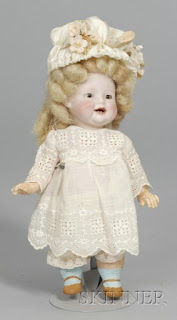 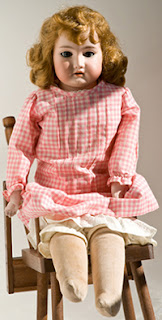 “I’m looking for Bonnie Babe. ‘Bout twenty inches high. Brown hair. Brown eyes that close and a mouth that opens.”
“Bonnie Babe, is it?” Flanagan asked. He could vaguely recall the item from his insurance days. People often made claims for antique dolls stolen or destroyed by fire.
“Bonnie Babe,” the man repeated, lips tight. “For a child.” There was a brief flicker of alarm in his eyes, an excess of sudden blinking. Flanagan was on the verge of saying something facetious, but seeing the brief pain, held back. “Bonnie Babe, you said.” He had said it twice.
“Remember the box. Bought it for my daughter when she was a child. Middle twenties, I’d say. Millie was photographed with it, you see. Now Charlotte wants it and I promised I’d find it.”
“Have you got the picture?”
“Back in Flint. If I saw it, I’d know it.” The man shook his head. “I promised it.” His determination was as real as his apparent frustration. Still the man did not smile and gave off unpleasant vibrations, which considerably sparked Flanagan’s disinterest. He was about to shrug the customer away.
“It’s my granddaughter. She’s at Lakeside General for a heart operation. Leaky valve. Fair chance. Tricky.” His last remark seemed unsure and his eyes could not hide their worry. “She’s being prepped for an operation. I told her I’d try to find it. Not try, exactly. I said I’d find it. You know what a promise means to a little girl?”
“Let me check my inventory,” Flanagan said, ignoring the answer. The oldest mush in the world, a doll for a little ailing girl. He felt that tug of storekeeper greed. Manna from heaven. The perfect customer. No browser, he. “Be back in a jiff.” Flanagan went back to the kitchen where Emily was rifling through the catalogues.
“Live one?” she asked.
“To die for.” He chuckled. “Dolls. He wants a Bonnie Babe. Brown eyes that 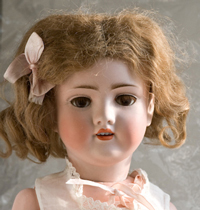 close. Mouth that opens.” She tapped her teeth and her green eyes grew dreamy, which was her usual thinking mode, followed by running her fingers through her hair. 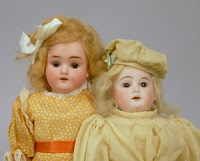 She grew silent, sipped the last of her coffee and tapped the table with her knuckles. “Lucy Downs. If anyone got a doll like that it was Lucy Downs. Of course, she was a few years older than me….”

I was drawn to this book because of the title...my mother collected dolls that were real-life sized in her older years and I still have the one we named, Glenda. None of them were "name" dolls except for Shirley Temple, who we all loved as an actress. Still, it was fun to take Mom shopping and looking for older dolls that were not considered "collectible" but rather that she could enjoy looking back on as her own children...

Flanagan and his wife owned an antique store, but they didn't have any dolls to offer when a man came to visit their shop, looking for a specific doll, Bonnie Babe. The man had purchased the doll years ago for his daughter and it had been handed down among the family until it was so old that they had to throw it away...

But tragedy had struck--his granddaughter was in the hospital, waiting for surgery. She had seen so many family photographs of Bonnie Babe, that her heart was set on having Bonnie Babe with her as she was in the hospital. Her Grandfather would do anything--pay anything--to get that doll he had promised. His appeal was gruff, anxious, and almost demanding to the owners of the shop. Could they get that doll--fast?!!!

The interesting twist early in the story is that, almost immediately, it was the search for the doll that came to be the lead in for the murder mystery in which Flanagan becomes involved...

All it took was the phone call to the potential owner of the doll and the realization that they might possibly own a very valuable doll that somebody wanted to buy... Or, it could have been just incidental, that Lucy Downs' son, who was a compulsive gambler, chose that time to get into his mother's doll collection and stole and sold five of those valuable dolls...

Flanagan was thrilled when they found a doll to specifications so quickly, and he went to pick up the doll...

Immediately something was different from the original contact. No, they didn't have the doll...Sorry...please go away...

And when Lucy Downs soon died, it was Flanagan that didn't believe it was natural. He had watched her looking worse quickly as he had tried to deal with the doll issue... and it was he who was finally able to convince officials that she had been murdered...

I especially enjoyed Flanagan and Emily as main characters... They seem so suited for each other and the personal interaction, dialogue and romantic side of their marriage was explored fully and resulted in a novel that was still a Warren Adler masterpiece, but was also much more fun to read and become involved with. 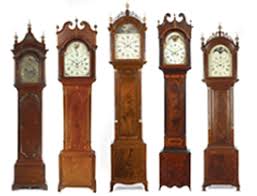 Adler is not genre-specific, but I must admit, I'd like to see another Flanagan cozy mystery. The expertise given to this retired couple may be more than the average "amateur detective" situation; however, the obvious enjoyment of this couple's life, as owners of an antique shop, is contagious. After all, who else but Adler would include a 13-gong antique grandfather clock among their inventory...and then try to explain to potential customers that the clock was "not" broken, but that it was unique...and made that way... Could Flanagan talk somebody into buying that particular clock? Well, he and his wife both certainly tried! Every beautiful clock needed a home.

The family drama was also very successfully done as we look into the lives of the Downs family and see that they had quite a unique situation that perhaps allowed so much confusion that death could occur so quickly and, perhaps, easily... After all, it was Flanagan who pushed to do a formal investigation into her death.

While some may not enjoy the addition of numerous puns between the starring couple, I found them quite endearing and a pleasant exchange between a loving couple that, frankly, was refreshing in today's world...Adler's wit appeared here as in no other book that he's written, I'll wager, based upon those I have read and their genres... In fact, the characters, good and bad, are worthy of praise. I found the other antique dealer in town--the one who had bought the stolen dolls--just as one would expect for unscrupulous sellers who thrive in a business where it is easy for deals to be made in favor of the seller, not the buyer...

This stop off into the Cozy Mystery genre was especially delightful and a surprise in light of other books by the same author... If you are a fan of Warren Adler, don't allow this one book to be bypassed. You will miss a unique voyage into another side of the writer, that is rarely seen... Appreciate it for that alone! And enjoy! But, yes, the mystery was tangled enough that I wasn't quite sure...whodunit! Highly recommended.